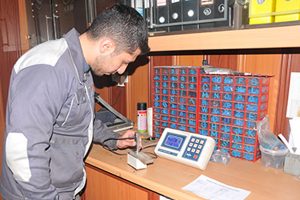 Mechanical Properties Testing used to check that alloys and castings are within specification:

Hardness Test: A non-destructive test giving a numerical value, which can be used to assess the machinability and wear resistance of an alloy.

Tensile and Impact Test: Conducted on test specimens, these tests commonly measure ultimate tensile strength, yield strength, elongation and reduction of area data. Other tests can determine the ductility and strength of a sample by measuring the amount of energy absorbed during fracture.

Service Load Test: Conducted on the entire casting, these tests measure deflection when a load is applied. Hydraulic pressure tests can be carried out to destruction or a pre-determined proof load and spin tests can be used for rotating components.

Chemical Test: These tests will determine whether the chemical composition of an alloy, which can have a large impact on the properties of the casting, are within specification. A specially cast sample is analysed using spectrographic atomic absorption or x-ray fluorescence.

Casting Integrity: Non-Destructive Test (NDT): The integrity or soundness of a casting can obviously have a dramatic impact on the performance of a cast component but very often defects can be hidden within the structure of the casting. Various Non-destructive tests can be specified by customers and undertaken by Hajm steel to prove the integrity of castings prior to delivery.

Visual Inspection: a variety of imperfections in a casting, such as sand holes, surface shrinkage, blowholes, etc. can be picked up by careful visual inspection so this is the starting point.

Dye Penetration and Fluorescent Powder Test: Used for both ferrous and non-ferrous metals, these tests can reveal tiny surface cracks, pores and other surface imperfections but cannot reveal internal defects.

Magnetic Particle Inspection: Used to reveal small cracks at or near the surface of ferrous alloys by creating a strong magnetic field around the casting. Small metal particles are used to detect distortions in the magnetic field as defects and voids react differently to surrounding metal.

Ultrasonic Test: High frequency acoustic energy is transmitted into the casting and measurements of deflected energy can reveal the location and size of internal defects. This method can also be used to measure wall thickness and nodule count in ductile iron.

Radiographic Inspection: Radiation from an x-ray tube is used to reveal internal defects as they absorb less radiation. The areas where less radiation has been absorbed are revealed on radiographic film.

Eddy Current Inspection: Used to detect minor cracks and defects near the surface and discontinuities in the casting caused by material changes. This is a fairly expensive process and is limited to electrically conductive metals.

Pressure Testing: Where part of the specification is for a pressure-tight casting; air, water or inert gas are used to test the casting for leaks under pressure.

Machining Hajm steel can provide castings raw, with proof-machining or full precision machining as required, in our  machine shops or those operated by partner foundries 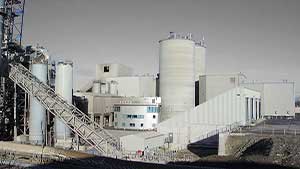 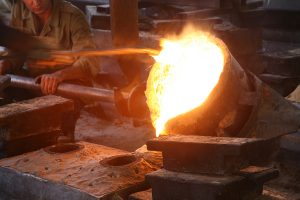 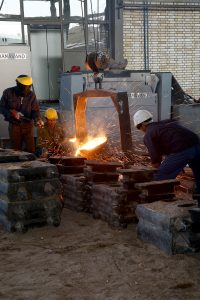 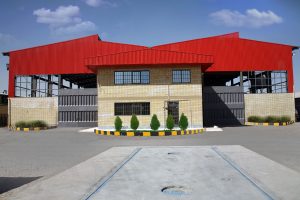 Machining Hajm steel can provide castings raw, with proof-machining or full precision machining as required, in our  machine shops

Some of our clients

Hajm  Steel  provides precision cast and machined components across a wide spectrum of markets where high quality castings are required. We have particular expertise in the production of pressure-tight valve and Mines spare parts, scrap’s shredder hammers   ,  and a wide range of precision castings for many engineering applications.  castings include alloys of Carbon and Stainless Steel    ,wear resistance steel ,heat resistance steel ,Manganese Steel l ,white and gray cast iron , ductiel iron and many others. We also have a full range of testing  ,  machining ,heat treatment ,surface treatment and finishing options available.